The other night I pulled some tarot cards to ask my guides what's going on and what's coming down the pike.
They showed me a lot, for once. Both for myself and others. They showed me things falling apart for someone else and then getting better for them after they pick themselves up again.
For me they showed me that I was on the right path and to just lay low and focus on my plans for now.
I know it's going to be a long road home because my child's father is resisting change as usual and doesn't want me to talk about going back so much. I'm not going to let him do what he did before with our split, as in pretend to be on board then refuse to go through with it and start the whole process over until I had to call in outside reinforcements. So I'm going to book an appointment with a therapist so we can discuss it with a professional present. Someone there to make sure there's no trickery afoot.
I'm not the kind of woman who takes a child away from their father for no good reason so I will trust the universe to guide me and help me behind the scenes like they always have in the past.
I asked about love and they showed me that it would come to me at the appointed time. I asked when that would be and they just showed like, after I walk away from the emotional stuff I've been going through heretofore. Life has brought me so low in the realm of relationships that I basically give up. If there is anyone they have in mind for me, then they can find a way to bring us together. I'm healing. I cut off one last  female friend whose  energy was deceitful and becoming toxic, and now I'm just going to pursue school and my other projects. It's lonely sometimes but I think I've become more introverted in the last year. I can handle it a lot better.
Just because I was in a good flow I asked about the person they have in mind for me. I said what's he like? What does he look like? Can you tell me anything? They showed me the King of Cups.
I mean, I'm fine with it. 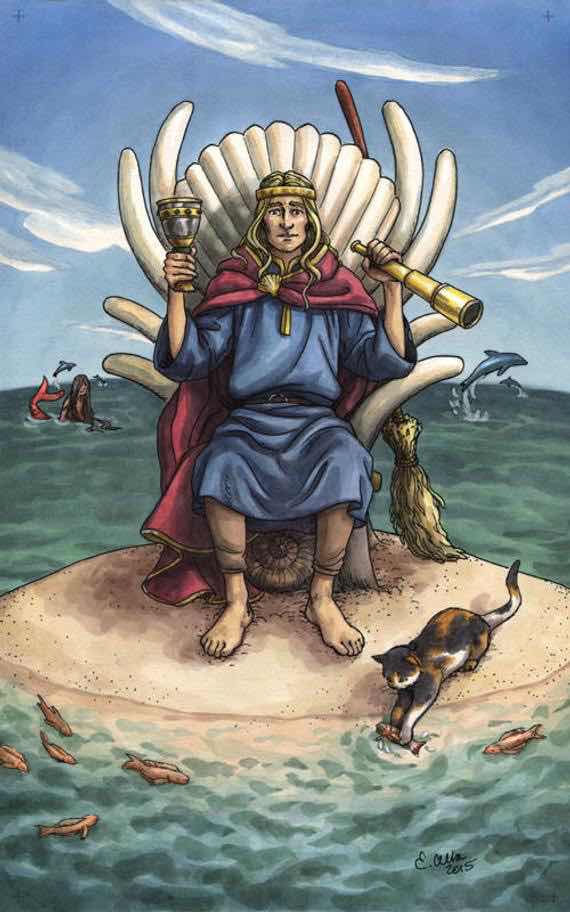 From my Everyday Witch Tarot deck. King of Cups.