Okay, so... If you're here reading this, you either tripped over something in the universe and landed here or you know me in real life. So if you know me in real life then you know I say things like, "I've been thinking a lot about dimension-hopping lately, and something about this week makes it feel really possible all of a sudden." Right? Right. It's late and I really need to go to bed before long, so I'm going to just tell the following story without doing a lot of hand-holding and offering up a bunch of back-story, okay? Just go with me on this. Ready? Okay.

I've been thinking a lot about dimension-hopping lately, and something about this week makes it feel really possible all of a sudden. The thoughts began, well, long ago, but this time around I'd say it was Saturday night, and Saturday afternoon is when the new weekly Torah portion is typically introduced to the congregation in a synagogue. Why is this relevant? Stick with me and I'll tell you. So Saturday night I had an intense experience of feeling like I was approaching a point of no return. Some dude from Tinder, which I'm not even actively participating in right now, messaged me and ended up asking me out on a date for the next day. He seemed nice and I didn't have any other plans, so I agreed to go. But after I hung up the phone it felt like, something about this feels like if I go on this date tomorrow, it's like I will be choosing a certain... quantum... path? Is that a thing? And I'll enter a new reality and it's like... I knew that ultimately this guy was not the person for me to date but he seemed like a very logical and pleasant choice on paper. But it was like, I could feel that beneath that path was another one, like a river, flowing and waiting for me to notice it and jump over. Not exactly sure what's in that river, but I know that it's preferable to the other one. So I decided not to go on that date, and the next day before I left the house I canceled. I didn't tell him anything about that I felt like I had heard an angel and my wild hare spirit guide telling me not to because of like, portals to other dimensions and stuff. I just said I wasn't ready to date yet. *shrug* Why complicate things?

Okay, so back to dimension hopping. So now we're at Sunday morning and I definitely felt really different and clearer and I knew I had made the right decision. Then on Sunday night I had a tremendous reiki session with my friend Suzanne. It was very, in a word, trippy. I'm not going to get into it, but the morning after THAT, I guess yesterday? Monday? What day is it right now? We've crossed into Wednesday here, okay whatever. Monday I felt like a big difference because we had cleared out a lot of old stuff, like high school stuff that I had kind of forgotten about, and I felt way different. (Why is high school trauma so potent, anyway? That's a question for another time. The short answer is probably hormones but I feel like the longer answer is something along the lines of, you're most purely your unfiltered unadulterated self and you haven't been deadened yet so you're like a live nerve ending/tuning fork that plays the singular note of You. So you feel everything very deeply. Maybe?)

Where was I. Right! Okay so like, I don't have time or attention span to physically type out all the things, but just trust me when I tell you that everything since Saturday night has been RIFE with synchronicities, both for me and for other people in my soul tribe, and their soul tribe members, etc. RIFE. (It's fun to say.)

Then today I felt kind of like... Weirdly empty and disconnected. I was like, this is strange, what's going on. Then I went to Icelandic class.

I'm sitting around after class and the phrase "dimension-hopping" has now been floating around my mind for several days. I remembered that back when I lived in Chicago, my "Chicago mom" (Everyone should have a spiritually adoptive parent who lives in Chicago. I don't know why. Maybe because of the accent. Or the hot dogs. But I digress.), Nancy, introduced me to Kabbalah because she's Jewish and she also has been studying at the Kabbalah Center for years. She used to take me to events there and stuff, and she was very generous with her time, energy, resources, spirit, love, etc. She's a Scorpio and very petite and an energetic powerhouse. Once, one of the Kabbalah Center's most "famous" teachers was at the Chicago location for an event and he asked me how I had come to be there. I told him it was because of Nancy, and he stopped, looked deep in my eyes and said, "You came through Nancy?" and I said yes, and then we shared a knowing smile. She just... She's deep. She can look into the eyes of a grown man much, much taller than herself and say like, two words, and the guy will be like, "Whoa." She's like that.

Okay so where was I? Ugh, I keep doing this -- right! Nancy. Okay so the Kabbalah Center. So I remembered all of this because they have this chart of the "72 Names of God." Now, obviously, I am not a scholar of rabbinical studies or Jewish mysticism or anything like that, so don't come for me. I just remembered that they have this chart of 72 three-letter "names" for God, and according to them, each one is imbued with a certain energy and can help you with different things if you meditate on them and have certainty (their word for faith, basically) of the outcome. And I remembered that they had at least one that had something to do with dimension-hopping. So I was like, where is that thing, I want to see the list of all the names that they have. Fast-forward to me giving up and downloading their app onto my phone because I couldn't find the complete list anywhere.

So I'm looking up different ones, I'm remembering times with Nancy, and then I read that the origin of the 72 names (I read it not only on their app but elsewhere on the internet on a site not affiliated with them) is the three verses in the book of Exodus about the splitting of the Red Sea. And they emphasized that apparently the people had to walk into the sea up to their necks before it split. Because that's how much certainty they needed in order to manifest the miracle. And so the 72 names are from I think the number of words or letters in the original Hebrew and somehow they came up with these series of letter groupings. Their thing is that you can read an individual name (from right to left because it's Hebrew) in order to connect with its specific energy, or you can read all of them in a row (top to bottom, right to left) to connect with all of them at once.

I wasn't going to tell this story, but what the hey. Before I went on the trip where I ended up meeting my now ex-husband, Nancy took me to a Shabbat service at the center, and the Torah portion for that week was something to do with soulmates. At the time, I had met this British guy somehow through facebook who was working in Iceland, and one of my cousins kept inviting me to come visit her, and I was also going through a "what am I going to do with my life?" crisis and things were coming to a boiling point all around. So I had decided to spend my tax refund and poor people stimulus (Thanks, Obama!) on a trip to Iceland to stay with my cousin and just see what happened. So I go to this Shabbat and I had been telling Nancy about this British guy, and then all of a sudden the energy of the week is soulmates. And the teachers were like, here, if you scan the three-letter name that has the energy of soulmates and look at the Shabbat candles in a certain order, you'll manifest your soulmate. (I did end up meeting my now ex-husband on that trip, but... like... we're divorced now and even though we did a lot of soul evolving, I really do not think that we are that for each other. We're more like soul... family? I wanna say?) So Nancy and I were like, elbowing each other like crazy and she like shoves me over to make sure that I had an unobstructed view of the Shabbat candles and the three-letter name and I did the thing and then we were giggling and she was like, a pure Scorpio Jewish mom in that moment and I loved her for it, it was so funny.

Okay so I remembered that moment, right, and then I'm like, I wonder what the Torah portion is for soulmates? Wouldn't it be funny if that was this week because I'm in this rabbit hole of Nancy memories? So I look it up and I saw something about how it's the story of when the guy finds Rebecca to be Isaac's wife. So then I'm all, okay so what's this week's Torah portion? Let's see if it's that one.

Are you ready for this?

No, it's not the one about Rebecca. This week's Torah portion...drum roll... Is the splitting of the Red Sea.

That exact portion. The root of the 72 Names of God.

I TOLD Y'ALL! I still got it. See? Is anyone actually listening and not just like, "Aren't you a high-strung little person, listen to all the funny things you say. Dimension-hopping. An angel whispered it to you. You're so crazy, I love it! Say more things like that! Bahahahaa! You're! So! FUNNY!" (Remember my dream about the worm the size of an anaconda nobody thought was a big deal except for me? Omg WORMHOLE?! Why didn't I think of that?! So many layers, you guys.)

So obviously, I feel it's my responsibility to share this information just in case somebody needs it. You never know.

All right, so the moral of the story is, I'm apparently low-key in tune with the fabric of the cosmos in a very surreal yet also extremely real (depending on where your mind lives) way, this place is weird (like, the here and now. it's weird), and I need to take a shower and go to bed because I had to move my tattoo appointment to tomorrow (actually later today, Wednesday) because I only have a half-day of work and I don't have to take any time off. I'm a little scared because tattoos hurt but I can breathe through it and just get in the zone.

Here are the 72 names if you want to scan them. The first one is time travel (going back and removing negative seeds you may have planted with actions in the past and uprooting them so positive things can grow), the 28th one is soulmate, let's see what else do people like... The third one is miracle making. This is from the top right corner. You can also just get the app, it's like five bucks. 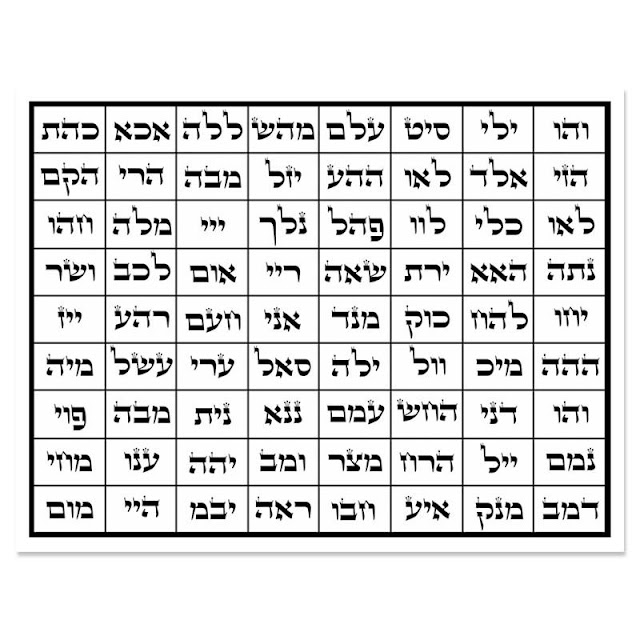