imbue: to inspire or permeate with (a feeling or quality)

Yesterday I was looking for an old picture in my phone, and I was flipping through my photo album quickly, skimming over the images scrolling by. I saw pictures of myself, and to me I look so different now. I looked so lost in a lot of them, even the ones from just a couple of months ago.

Today my friend and I went on a hike outside of town, and then gave up halfway up this little mountain because we got too hungry. She told me there were real tacos by real Mexican people in this city, which I refused to believe, but her boyfriend is Mexican and apparently he's had their stuff and he approves. So we walked to this place that used to be a bus station but now is a food court thingy and got some tacos. The guys working there put up with me talking to them a little bit in Spanish. I got tacos al pastor and it was legit. The first time in MONTHS that I've had that glorious taste on my tongue. Heaven.

So that's good to know because it's so close to my house and now I'm probably going to be there like every week. I shoulda been like, "Get used to this face, hombres, cuz you're gonna be seeing a lot of it." Then again, I had on a mask so... "Get used to these eyes and this forehead, hombres."

I was thinking about those pictures of me and how I feel a lot more secure in myself now. It's like I got to rewind back to... Let's see... The Chicago years? The Redwood City years? Somewhere in there. I was in a very good place back then. Only now I have the mistakes of another decade under my belt and have learned and continue to learn from them, so I suppose I'm better off.

It made me think about patience. Like, I was telling my friend today how I wish the virus would go away already, because I really want to go out and have fun again. Like, just go out on the town and listen to music or something. And she goes, "You really picked a great time to get divorced, Inga, now you're stuck at home during this pandemic with no way to meet anyone, hahaha." Omg so funny! No, she was just playing around and I laughed too, like, omg I know!

I gave her a ride home and then got kind of sad and felt a little lonely coming back home to an empty place because it's a dad weekend and I won't see my baby until Monday afternoon. And there's no one to keep me company, and I can't go out either, and there's a big ol' time difference between me and my friends and all that. But like, even though these days of waiting can feel empty and slow, behind the scenes I guess something is happening. Because my eyes look more like mine today than they did a month ago. And my heart feels more secure than it did a year ago. And my life looks completely different than it did two years ago. All this time tapping my feet and crying and praying for things when it seems like nothing is going on... Something is definitely going on that we can't see. You know?

Sometimes I think I fear getting what I want because that would mean saying goodbye my fantasy of what things would be like once I do. Like, I would like to get remarried someday and have a happy family. But that would mean like, bringing the fantasy down to touch the world of the mundane. It would mean the other person would get annoyed with me one day and snap at me and hurt my feelings. Or see me with bed head and a cold and bloated from eating too much and think I looked gross. Or the kids would be screaming and mouthing off and we'd have a moment of like, ugh why the hell are we doing this again, remember when we were young and cool? And take like twenty minutes to take the garbage out just to get a break. It can make you wonder, is it worth it to have your dreams come true, if doing so means that they get touched by "reality" and they get mud and money and wrinkles and cellulite on them?

I was thinking about that as I was draining some pasta I made for dinner. And then I thought, like, well I'm living in the mundane world anyway. I still have to cook food and get older and pay rent whether my dreams come true or not. If I'm going to live, then this is where I'm living. In the regular day-to-day. The time will pass anyway. The laundry will still need to be folded. Kids will still scream and mouth off. And maybe the thing is that it's not just dreams that get some dust on them when they come down to earth, but it's that earth gets some dream on it, too.

Maybe for some people, when they're taking the garbage out and they're like, fucking hell I just need a minute out here to catch my breath... They come back inside and their person gives them a kiss or something, or they're being sweet with the kids who finally calmed down and then the magic comes back. It's not gone forever because it's no longer stuck inside your head. It moved in with you instead. Like, it lives in the kitchen now. And it follows you to the bathroom. And it turns the shadows in your bedroom a prettier shade of blue. Sure, it loses the illusion of perfection, but it brings a little grace and settles it over top of your regular life. And makes it a little bit perfect.

I reckon it's worth it. 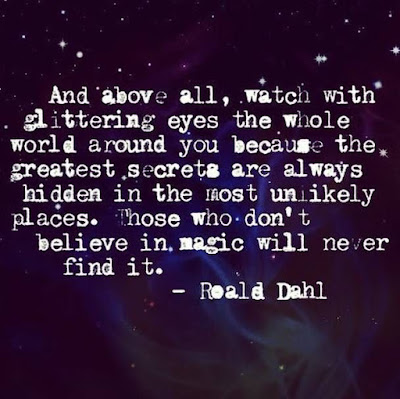