You sent me a gift. It was in a little box and it was your two favorite cigarette lighters and then a couple of other things that were wrapped, with a folded note at the bottom. I didn't have any privacy to finish opening it at that moment, I only saw the lighters and heard a few words of the folded note in my mind (it was a nice one not a mean one). But you had walked in and left it there when I wasn't looking. You were in a white t-shirt, everyone else was wearing shades of black. The houses were all beige. The mothers all wore black and carried black pots and handbags.

I accidentally walked into your house in the dream, but no one was there and I walked back out. Not in a sad or final way, we were all bustling around. It was like, we'll be right back, we have to get this stuff done first. The mothers were keeping us busy. You were helping your mother and I was helping my mother, and they kept us running around because they wouldn't just sit the fuck down. (So realistic, actually, is yours codependent too?)

Before I went to sleep I was talking to the Lord, and seeing visions. Oh snap I forgot to write them down. I remember the meadow in the stars where every individual was a flower, and I saw myself as a flower, too. 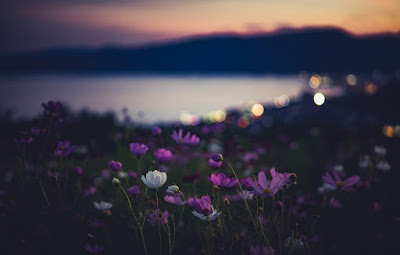 Anyway. I was having visions and I was asked to forgive my parents (again). But this time I did a better job. They may have hurt my feelings badly, and they may not know how to nurture my heart, but they did a lot better than their parents did for them. Yesterday kind of stung because... She celebrates the traits my daughter has that she got from me, wants to nurture them and help them grow. But when I asked for that when I was young, I got the opposite. She never even saw those traits in me. I got to be the object of projection instead. Some people get told they can't do something or that they're not good enough and it makes them turn around and fight. But I was a sensitive child. It just made me turn around and cry. It gave me a sharp pain in my heart my whole life. And when people were kind to me, and wanted me to stay with them, it made me think, "That can't be right." But when they made me feel unworthy, that I could live with. As for my dreams? I never even really tried. Because when something means the most to me, I tend to get excruciatingly shy. The cruelest words echo and even if my wishes had come true in an instant, would I even have been able to receive them?

Even if my father and mother abandon me, the Lord will hold me close. (Psalm 27:10)

But I'm willing to let that go. I lost years I can't get back. But somehow I think they inadvertently protected me from something worse. And even though I can't go back and relive my life knowing what I know now, I still have the gift of time. I'm less messed up than they are, and I'm decades younger with more wisdom now. Oprah raised me right (honestly she taught me and my generation of girls so much that no one else was teaching us at the time). I've learned that another human isn't an authority over me, that I don't owe people my loyalty just because they feel like controlling me. No one is allowed to label me. And when boys dressed up as men tried locking me up and neglecting me, except for when they wanted to parade me around and display me... I stopped putting up with that shit.

Forgiving just means letting go. Pulling out the knife. It kind of falls out on its own. When they hurt me so terribly, when I needed them the most... When I was dangling and they stomped on my fingers... I feel like they just don't know what they're doing. Maybe they go unconscious.

But now I really am stronger.

"Tell me everything, it's okay."

"Ask me for what you want."

"Speak aloud the promises I made to you."

"Do you have faith? Enough to contain them?"
"Forgive them."
I used to worship other gods. But they all let me down. Except for Brighid of Kildare (who's a saint now, actually). She recently told me, "Try to trust J.C. He's a Pisces. You know how they are. When his children don't trust them, it really hurts his feelings. He's strong enough to take it but go easy on him, he's my friend."

Sometimes it feels like the end. Like we're almost out of time. Once I told Sarah, if anything happens to me, don't let my daughter forget me. Tell her about me. Don't let them turn her into them. Make sure she gets to be who she is. Don't let them take away her magic. They never do it all at once. They do it little by little. And I told her if anything happens to me... Tell the one I told you about everything you know. Do'nt let any of it go unsaid. She said she would, and I know she's trustworthy. But she also said, "That's not going to happen, though." She's a prophet too, like me and you, so I know it's true. She also says, "Don't try to predict, God doesn't like it." You have to leave room for him to work. You can't shut it out or try to pin it down. Know it's coming and then do the next thing he tells you. It's always something simple. Go get a drink of water. Accept that invitation. Wear that shirt. Take out the trash.

Your sons and daughters will prophecy. Your old men will dream dreams, and your young men will see visions. (Joel 2:28)

The devil uses words like never, you're a fool, give up, quit.

He was a murderer from the beginning, not holding to the truth, for there is no truth in him. When he lies, he speaks his native language, for he is a liar and the father of lies. John 8:44

I promise you, it's all going to turn on a dime.

I won't always be so shy.

There's no way to do this and be cool.

Sometimes I'm even scared to go outside.

But it's all happening.

Don't go away. Don't even pretend.

"My thoughts are nothing like your thoughts," says the Lord. "And my ways are far beyond anything you could imagine. For just as the heavens are higher than the earth, so my ways are higher than your ways and my thoughts higher than your thoughts. The rain and snow come down from the heavens and stay on the ground to water the earth. They cause the grain to grow, producing seed for the farmer and bread for the hungry. It is the same with my word. I send it out, and it always produces fruit. It will accomplish all I want it to, and it will prosper everywhere I send it." (Isaiah 55:8-11)