Back when I did theater, on the day of a show I would start out excited, then gradually get more and more nervous and high-strung until finally I got so nervous that I sort of peaked, and at some point, usually in the car on the way to the venue, I would just stop caring. The anticipation became too uncomfortable and I was just like, you know what? It's fine. Whatever happens, happens.
Today I cried in my boss's office. This is not that big a deal in the States. At least for women, because society. Just about everyone I know has, at one time or another, buckled under the pressure and cried to their boss about stress. Today I learned that this is most likely NOT the case in Iceland, and it's kind of hilarious.
My primary boss is an Icelandic Capricorn. So. Need I say more? I could just end this post right here. I know my DNA kit said that I'm the same bloodline as these people, but I feel low bursting into their office with a fresh vial of spit and screaming, "RUN IT AGAIN!"
I went in to tell them that I need to lower my work hours to four days a week if at all possible. I'm just not handling the stress well and neither is my daughter. This morning she woke up and yelled/cried, "WHY DO I HAVE TO GO TO SCHOOL TODAY?!" about twenty times before agreeing to come have some breakfast. And I feel the same way. I just don't have the bandwidth to cope with all of these changes plus the added responsibilities of living here, PLUS  winter on the way. I just don't.
Usually if you cry in front of people in the States, you get some kind of, "Awww, sweetie!" if you're in the South, or at least some sympathetic clucking and a box of tissues handed to you anywhere else. 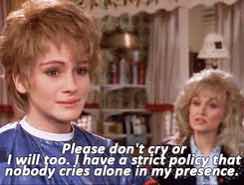 But here my boss saw the tears, at ramrod straight, and did not move or blink or breathe.

But I feel better. They're going to see what they can do about my schedule, I reached peak stress and now I feel neutral. Whatever happens, happens.