File Under: Glad To Be Here

Well, today we got a spot for my daughter at a preschool. Most preschools here are public, they get subsidized by taxes and are therefore super affordable to parents. Each school is allowed to implement their own philosophies in how they teach and run the school, but certain things are consistent and the government sets education standards that the children need to have met by the time they start grade school.

Since I got hired at a preschool in a neighboring town, I had to find a spot for her at a local school in the city pretty soon (although my boss didn't put any pressure on me, she understands the situation). It can take some time to get into a school, so her dad and I finally figured out how to find out where she was on the waitlists of the four schools I had picked to start with (just ones that are in our neighborhood), and narrowed it down to two where she was close enough to the front of the line that she had a shot of starting pretty soon.

I called those two schools and spoke to the school directors. One said she had a spot for her ready, but didn't really talk to me much, just sort of said that she'd have the classroom teacher let me know once they figured out when she could start and then kind of rushed me off the phone. Yeesh.

But the other one was much better. A woman who sounded about old enough to be my mother picked up, and had a warm voice, and I told her that my daughter was on her waitlist, and also on another school's, but I really wanted to find the best fit for her, because... And I just kind of launched into the whole story of everything she's been through in the last year. I didn't go into excruciating detail or anything, but I told her that we're divorced, and how because of the pandemic she's been home from school for going on five months now, and she loves learning and actually kind of taught herself to read during that time, but she misses being around kids and her teachers and everything, and then her grandparents moved, and then we moved all the way to a different country where she doesn't really know the language, and on top of that now her parents are living in separate homes for the first time... It's a lot for a little girl to handle.

And I told her that I'm going to be working at a preschool too, and that I'm studying to become a teacher, and that as her mother and as an educator... This stuff has had an effect on her. I told her how she's become a lot more sensitive and anxious and insecure after all of these major changes happened back-to-back. And I really want to find her a nice school that's going to be cozy and safe with warm, caring teachers who can help her learn Icelandic and keep her enthusiastic about learning, where she can make good friends and be her old self again. To help her be more... "More secure in herself," the director finished my sentence for me.

"Let me talk to the classroom leader and see if we can't figure something out, and I'll call you back later today to let you know."

She had heard me.

While I was waiting to hear back from her, I was getting a few things done around the house when my babygirl comes up to me with this giant teddy bear she has, and said, "Mamma do you know why I carry  Mr. Teddy around with me?" "Because he's so snuggly?" "No, I carry him with me for when I feel alone..." [insert heartbreak here] What??? Then she told me that she had had a bad dream the night before, that she and her dad and I had been walking in a store and there had been a hole in the ground, and she fell through the hole. Then she said that we didn't notice she had fallen in, and she had to find someone to bring her home and she was scared.

It was so hard to keep it together while she told me that, but I don't ever want her to feel that she has to protect me from her feelings, so I asked her more about the dream and feeling alone...

The past six weeks (how has it only been six weeks) have been super busy just trying to get everything lined up for living life. Traveling here, staying with family, finding our place, getting it set up and comfortable, getting her dad here, him starting his job and being focused on that, then the past couple of weeks I've been constantly on my phone applying for jobs, taking phone calls about jobs, going on interviews, following up, etc. Then getting hired and going straight into finding her a spot at a school. Obviously, she's been feeling brushed aside.

And that won't do at all!

Then the nice preschool director called back. I could hear a smile in her voice, and she let me know that they had a spot for BG and she could start on the 26th. I almost cried! I was so relieved. I didn't cry, but I did "American" all over the conversation with a bunch of like, "Awwwww thank you SOOOO MUUUUCH! I'm so happy and relieved thank youuuuuu!" Then we laughed about how I'll get a list of the many clothes she'll need and how she's used to Texas weather and needs to get some real snow gear and stuff.

She's such a nice lady! I can't wait to meet her!

Then I called my boss and told her what was going on and she said I could start September 1st so I could have BG's first week of school to help her get settled. Also so nice! (Side note: Apparently there is a baking club for staff at the school where I'll be working, and y'all know my ass is going to join and get overly emotionally invested in trying to out-bake everyone in there. Y'all know me! Putting the "fun" in "dysfunction" since 1982, baby!)

So I told babygirl that she finally had a school of her own. She was excited! Whew! Then I asked her if she wanted to invite her dad over for dinner (of course she did), and got some meat out of the freezer. When he came over that evening I took him aside for a minute and told him what she had said about the teddy bear and the bad dream. He's not a monster or anything, and was just as broken up about it as I was. So I was like, put your phone down today, no more work calls or emails, and let's just put everything aside and focus on her right now, because she's feeling invisible and that's not okay. He agreed. They had a lot of fun playing legos, I made a pretty decent dinner, and then afterwards we all took a drive to check out the playground situation at her new school and peek in the windows to check if we could see what it looked like inside.

I'm happy to report that the playground is awesome, she ran around like crazy and is now officially really excited to start! I'm excited, too. They get their meals prepared on-site by like, actual cooks, so you don't have to pack them a lunch! And they also have extra help for students who don't speak Icelandic, like they'll figure out how much support she needs, and if necessary they can bring in additional instructors who specialize in any language issues. Like, for free. That's just part of it. What?! I know.

Then we drove over to the school where I'll be working to see how long it takes to get there from her school (a whopping 4 minutes in no traffic, which I think I can handle after 30-40 minute commutes every morning and night in Texas), and just to show them what it looks like and everything and take cute pictures of her being in a great mood again.

My sister-in-law is an educator (and is getting a Rolls Royce for Christmas for all the help she's given me since I got here, from finding this apartment to helping me find my job, babysitting when I went on interviews, translating my resume and my cover letters and my post-interview thank-you note, and helping me apply for preschools for the wee one. I can't afford a Rolls, but I'm going to figure something out for that special lady!) and she's confident that by Christmas, the little girl will be fluent in Icelandic, have a new best friend at school and will be back to her old self again.

I pray with every fiber of my being that her prediction comes true.

So, parenting is hard, as is co-parenting after a split. But it's not impossible! Obviously, mistakes will be made, and it's not exactly fun being connected to your ex forever, but I'm finding that when the focus is on her, then the ability to get along in a cordial way flows a lot better. And just remembering that she's little and needs to have some fun time with both her parents focused on her simultaneously once in a while, that's a big learning moment for me. Because I tend to kind of leave the room (either mentally/emotionally or physically) and not really feel comfortable interacting much when he comes over. It's not a conscious thing, it just kind of happens. But just making it about her and letting her know that we both see her and care about how she's doing, that makes it less awkward. By keeping that mission in mind, then it's not about us and whether or not we get along, it's just about her well-being.

So I feel like that was a nice gift from Spirit. Like, hey, pull your heads out of your asses, this isn't about you, look over there at your child, she needs you both to get over yourselves and give her some family time. This is too much change for her all at once.

So, anyway. Below are some pictures at her school playground and at my school!

It's fun seeing these school playgrounds and what people in the family gravitate towards. I always head for like, the little grassy hill, where I would have played fairies, or a little stand of trees that I would have made into a pretend house back when I was in preschool. (That's right, I was weird as a child and I'm weird to this day! Stride of pride.) And of course, the swings, obviously. Her dad either climbs to the tops of things or like, investigates how things work, like faucets or other stuff I genuinely don't notice until I look over and am like, "What even is that?" So far the baby tends to just freestyle run around or gravitates towards balance beams, the slide/play structure, and of course, the swings, obviously. My dad (who's coming to visit with my mom the week of my birthday!) stands in front of whichever swing she's on and then bends over, pretending to look at something on the ground, so she kicks him right in the keester when she swings forward, and makes her laugh. My mom pushes the swing in a responsible way and takes pictures. 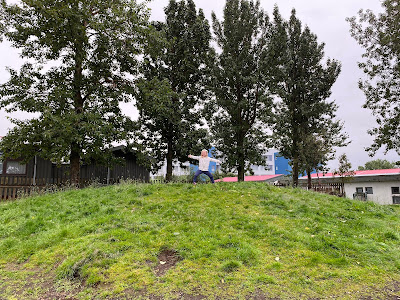 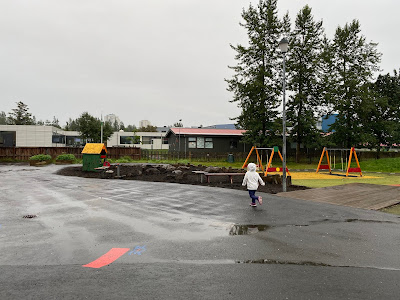 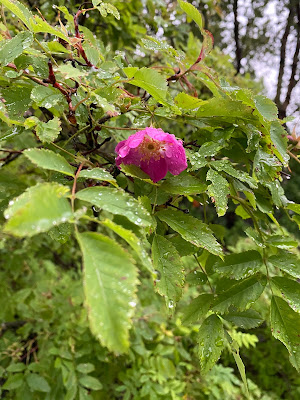 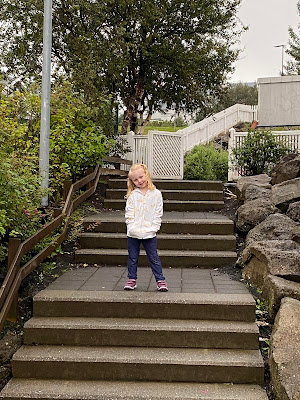 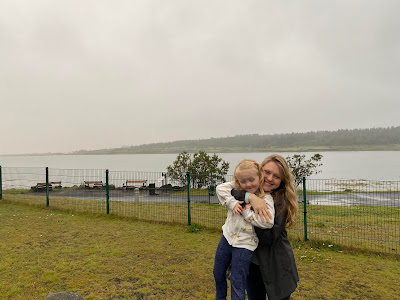