This is my 100th post, but a bunch of them are hidden.

Sometimes I wish that I could just let the devil take me down. Make me numb. Make me dull. Bring me down to my five senses and make me just want to claw my way to the top of some imaginary pile of people, stepping on necks, caring only about whatever it is the devil wants us to care about.

But I can't do it, because The One Who Pulled Me From The Pit comes to me, and He sits me on His lap. And when I hesitate for a second He says, "It's not like that, I only hold you like a father, a good father, holding his little girl when she's hurting. What's wrong, honey? I can see that you're going through something. I know your heart but I want you to tell me. Turn to me and let me help you. Do you think I would set you up to fail? I don't give like the world gives. Tell me what it is you want. Please have faith that I can give it to you. That or something even better. I have a plan, a purpose for you. I love you."

When you feel the darkness come and it makes you not want to turn to The Name That Is Above All Other Names, that's how you know it's evil. When it tells you not to reach out and ask for help. Not to pray. Not to call your friend. That's how you know.

So I did pray. And I did call my friend. And she answered. And we went around in circles and then eventually I felt better.

You must be in a dark place because as soon as I reached out to you I wanted to die all over again. I haven't felt that way in a while. It's like it attacked me, too. I was feeling pretty good until about 24 hours ago, or so.

I don't want to come home because if you hurt me there then this is all really done. That's not a threat or an ultimatum, it's just like, there's certain things you can't come back from.

Someone once told me you've never loved anyone. Back after you ratted me out and then a couple weeks later he started asking you about me and speaking for me without my knowledge or permission, and got everything mixed up and you felt like you were having a nervous breakdown. That's when he betrayed me for the last time and I knew right then and there I was definitely getting out.

So I don't bring it up anymore, because he'd probably just say, what did you expect?

You tell someone you love them and they rat you out and throw you under the bus. Then they keep coming around because reasons and keep, like kind of calling you a whore and stuff. (Do you only know whores or are you one yourself? How many people do you sleep with per year, anyway, that you think that I can't last a long time between dicks? You're not getting a one-night stand with me, unless you lie so hard that you convince me it's for real and then honestly that would be on you, not me. I don't owe you anything.)

What did I expect... I guess I thought I'd tell you how I felt and you'd be like, "Holy sh&t, me too! Is this a big deal to you?" And I'd be like, "Kind of, I mean yeah actually, it is." And you'd have been like, "Not to sound weird but me too." And I'd be like, "It's not weird. I mean the situation is, but if we were in France it wouldn't be." Then you could tell me your situation and I'd tell you mine, and maybe we could have talked on the phone and figured something out. And in the meantime been like, hey good job with whatever it is you're up to, you're so cute! Omg thanks, you too! Sent movie recommendations and songs and pictures back and forth. Until we could get together.

Instead, things went a different way. Maybe they had to. Because I was too vulnerable and you were too pretending-not-to-be-vulnerable.

So, you're dating someone else?

More than one, maybe?

My bed's been empty for a year. I mean, except for me, I sleep there. I'm not ashamed. To me it's more than skin-on-skin, and I wait around until I meet someone who feels the same.  Once, I almost tried with him again, but I just couldn't do it. That's over and done with. I can't get back into that head space, even if it would be convenient.

Sometimes I want to hate you, but I know you're not a monster. The Man told me He knows that you've been dishonest with me and with others, and He's not happy about it, but He's waiting for you. Working on you. Watching you. He cares about you.

People think forgiveness sounds so trite. But it's such hard work. Do you think it's easy to not curse a woman who I know hates me? Who has appeared like an apparition in my room? In my best friend's room? Who showed up in a dream and told me bad things about you? Who gave me a look in person like, "Ugh, what are you doing here." Do you think it was easy to pray for her?

To pray for you? Some days it's easy and others it's hard. But I do it, anyway. For a few weeks I backed off, because I was so scared about this pandemic and just coping with the looming threat of it. I could barely pray at all. I could barely think.

But I started up again. I ask that you'll be protected from the dark forces that surround you. That worm their way in. That tell you you're worthless. I pray that you'll be healthy and safe. That you'll find your way back to the light. That you'll remember that that's who you are and what you're made of. That you won't give up on life. That whatever is the best thing for you will happen, even if it means me not being a part of it. All these things and more.

The first star just came out. Hold up, I'm a make a wish.

I tell The Name that I don't want to go back home. But He shows me Christmas, and scenes from my childhood. They make me break down and cry. So I have to go. It's not just about me, anyway. It's for my little girl, too.

If you were ever to text me and just say hey, I wouldn't be mean. I'd just say hey, how are you? Just so you know. There were so many times I wanted to do that, but I didn't because who knows what you'd say back to me, if anything.

I guess I feel like... If I had sought you out from the beginning, then I'd know like, okay I was wrong about that one, let's move on. But I didn't. For the first time ever, I didn't. And I know you didn't either.

I had this science teacher in high school who was so great, and one day he was like, let's forget about the curriculum and just talk about everything. He told us about cold fusion and how we if we could figure out how to do it safely then we could use the water in the ocean to power all the world for free, forever. I was in twelfth grade and I sincerely had to bite my lip because I got a little choked up for a second when he said that. It blew my mind so much. Then he talked about the Big Bang. And he said that he was raised Catholic, and you know, some people are so religious that they don't want to believe in the Big Bang, because they believe that God created everything. And he said, but here's the thing. In the beginning all of existence was condensed down into that singularity, pure potential energy and dense matter, mass, all that. Then there was an initiating energy that made it all explode. But no one knows what triggered that initiating energy. And that's the miracle.

And I feel kind of like, on a much, much, much, much, much smaller scale, like that's kind of what happened between us. I was like, doo doo doo, I'm bored guess I'm gonna go to the bathroom now. Definitely feel like someone's watching me, but I don't know who so I'm probably just imagining it, I have a very vivid imagination, plus in crowds like this plenty of people stare at others, so whatever. I think I might get a drink soon-- Huh? ::POW:: Or, Bang.

After that my thoughts were kind of like, "You? It was you the whole time?" Then there were no words, then desperate screaming from the back of my mind going, "Oh God, say this polite conversation script, the whole speech area has gone blank, MOVE YOUR MOUTH AND MAKE IT SAY HELLO NICE TO SEE YOU, YOU IDIOT!"

I didn't force that to happen, I didn't chase it down. I didn't create the initiating energy. All the other times before, with all the other people before, except for I guess the guy in my 11th grade art class who made me laugh, I did make it happen. But not that time.

So I really don't know what to do with that.

But I guess I'll find out. Because I feel like, I put it all out there and I didn't do anything wrong except yell at you. And I think I had every right to do so. Just maybe not that much.

I think one of two things will happen.

One is that it will all go wrong and it will hurt a lot for the rest of our lives but nevertheless that will be the end of that.

Or something that we can't foresee and cannot force or bend to our will, no matter how much we would like it to, something perfectly orchestrated and surprising and undeniably real, like a fire, a visible light, an explosion that is loud then quiet with like, a ringing in your ears and leaves you stunned, will happen when we least expect it. 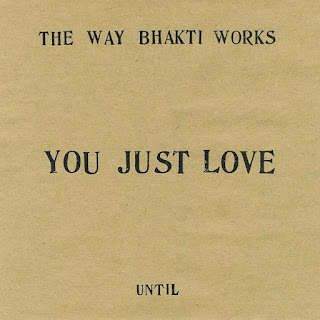