Well, the virus is scary. I found out we have a couple of high quality vacuum cleaner bags (thanks, mom) that I'm going to cut up to make homemade mask inserts... I guess that means figuring out how to hand-sew the masks themselves. We're in the planning stages of moving back to the Homeland in the midst of all of the additional stress.
It's so much to juggle and gamble on with very little in the way of extra cash to work with. We basically have to stay alive and healthy for two more months. Although my ex said that if the shit really hits the fan and we have to just get on a plane, we could. But I really don't want to do that. I want to bring my dog and my furniture. And hopefully the Chevy.
It's hard to know whether you're overreacting or under-reacting or what. Like, you look back in times throughout history and want to scream at people, "Just get out!" But when you're in the moment, things aren't so clear. I don't want to catch it on the flight, for example. What if we get there and then the local situation escalates as soon as we land? Let's not forget the stress of staying with in-laws while trying to find a place. Not to mention that June was when my ex and I were finally going to get separate apartments, because that's when this lease is up. We'll have to find a two-bedroom place in the Land and then keep living as platonic roommates until we're both gainfully employed, then one of us can move out. It's not that big a deal since we've been living that way for almost a year now. But losing the third bedroom will be hard because bedrooms over there tend to be tiny and our daughter will have to bunk with one of us.
I was stressed out today and finally decided to do what I do best in times of stress: listen to music and take a really hot shower. I suppose the shower was meant as a substitute for... I dunno, a hug, a social life, a feeling of safety, being able to go outdoors, working, not being terrified, etc. Trusty hot water and the plaintive opening strains of a little Tim Buckley did the trick and I finally had a little cry. Nothing major, just enough to know that I'm still in here. I thought about how I really do want to stay alive. The feeling of the water on my skin... I really love that. And I want to be my daughter's mom, every single day, for a full human lifespan, not a tragically short one. I'm not done being alive yet. I want to go to Vienna and Paris again. And to the mountains. Soft, green grass with flowers and fresh cool air. A piece of cake at a café, and beauty all around, and music. I really love it here on Earth. It's by far the best planet, any idiot knows that. We've got Beethoven, and lilacs, for crying out loud. Who else can say that? No one, that's who.
I was thinking all of this, and crying a little bit, which was a relief, and then I felt a sudden sense of calm. I'm not entirely sure where it came from, I'm frazzled and my wires get crossed when I'm frazzled. But it just kind of felt like it grabbed me by the shoulders and shook me (gently, of course, not like in an old movie when someone is getting hysterical or anything like that) and kind of told me to get a hold of myself. That I would make it. That we'd get out and be okay. My grandmothers have got me. My Oma's got me. That I come from a long line of survivors. I found that mask the other day, didn't I? Who else thought to look where I looked and found it? No one, that's who. And I saw that house in the snow with the candles on the table in that vision, right? My ancestors told me what to do, they gave me a heads up so that I'd know when it was time and wouldn't fight it. And it just so happens that the candles were the same colors as the ones I have on my little altar in my bedroom now. It was a different assortment at the time that I did that reading and saw what I saw, but now they're all there, no more, no less. The small, still voice was there in the shower and said... Just stay inside, be careful with your little girl, take your vitamins, have your groceries delivered so you don't have to go out to shop, and start packing. We'll tell you when it's time to go.
So I should really go through the boxes in the garage. 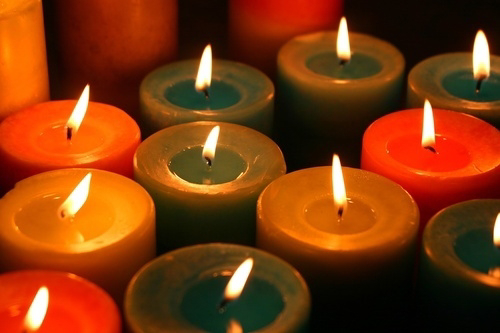