So like, I was baptized Greek Orthodox in Baltimore and all, but since I live in Austin, when I go to church, I go to the local one here, which is super beautiful on this hill, and the priest is really nice and it has excellent vibes. As such, I'm on their email list.

So I was up late tonight watching a fascinating miniseries on tv when I suddenly decided to check my email. Around 11:30 pm, the father had sent out the email below to the whole congregation, which states that all orthodox Christians are being urged by monks from two different major monasteries in Greece, who have apparently been in a prayer vigil for the world during the pandemic (okay so sometimes I just skim the emails), to either hang a cross on the front door of their home or draw one in olive oil if they don't have one.

So, since number one, I rent and number two, it's the middle of the night, I decided to go with the olive oil option and trace a cross on the front door with my finger. I grabbed my giant bottle of kalamata olive oil, which I bought at Trader Joe's but happens to be imported from Greece (and is delicious, by the way) and a couple of paper towels and stepped outside.

I wiped off a large area of the front door so it would be clean, and then picked up the bottle of oil. Well, I guess I didn't put the cap back on properly the last time I used it (to cook eggs this morning) because it was loose and the bottle slipped out of my hand and shattered right there on the ground at my feet.

Not gonna lie, that freaked me out a little bit. I bent over and dabbed my fingers in the pool of oil and drew the cross on there (extra big after all that, can't be too careful) and then looked back down at the mess. That's when I noticed I was bleeding. Nothing bad, just two little cuts on my shin and on my foot, and I was standing on a bunch of the glass "crumbs," but I don't think any of them actually cut me. (Also, the other day I accidentally stood on an ant-hill while getting a closer look at a ladybug and four of them bit my other foot, so what the heck is going on around here??)

That caught my attention, so I thought I'd go ahead and share this message with whoever wants to do it. I'm not a stickler for the rules, and y'all know I love me some Jesus because He's the same way, and Mother Mary is all about love, too, sooooo... If you want to draw a cross of any size in olive oil, or hang a ready-made one, on your front door and say a little prayer for the world and your family and your sweet self, please feel free to do so.

I also urge you to check that the cap to your olive oil bottle is SECURE before you try to do any of this, lest you should do something silly like drop and shatter it and cut yourself in the process.

And for what it's worth, all orthodox churches in the U.S. have canceled church services in person in favor of streaming, including all the Holy Week and Easter services, and they sent out a really sweet email talking about how they do this out of love and respect for science and modern medicine co-existing with faith. So, like, you know, no church is perfect, but I'm glad that they're being reasonable when it comes to safety measures in a pandemic. 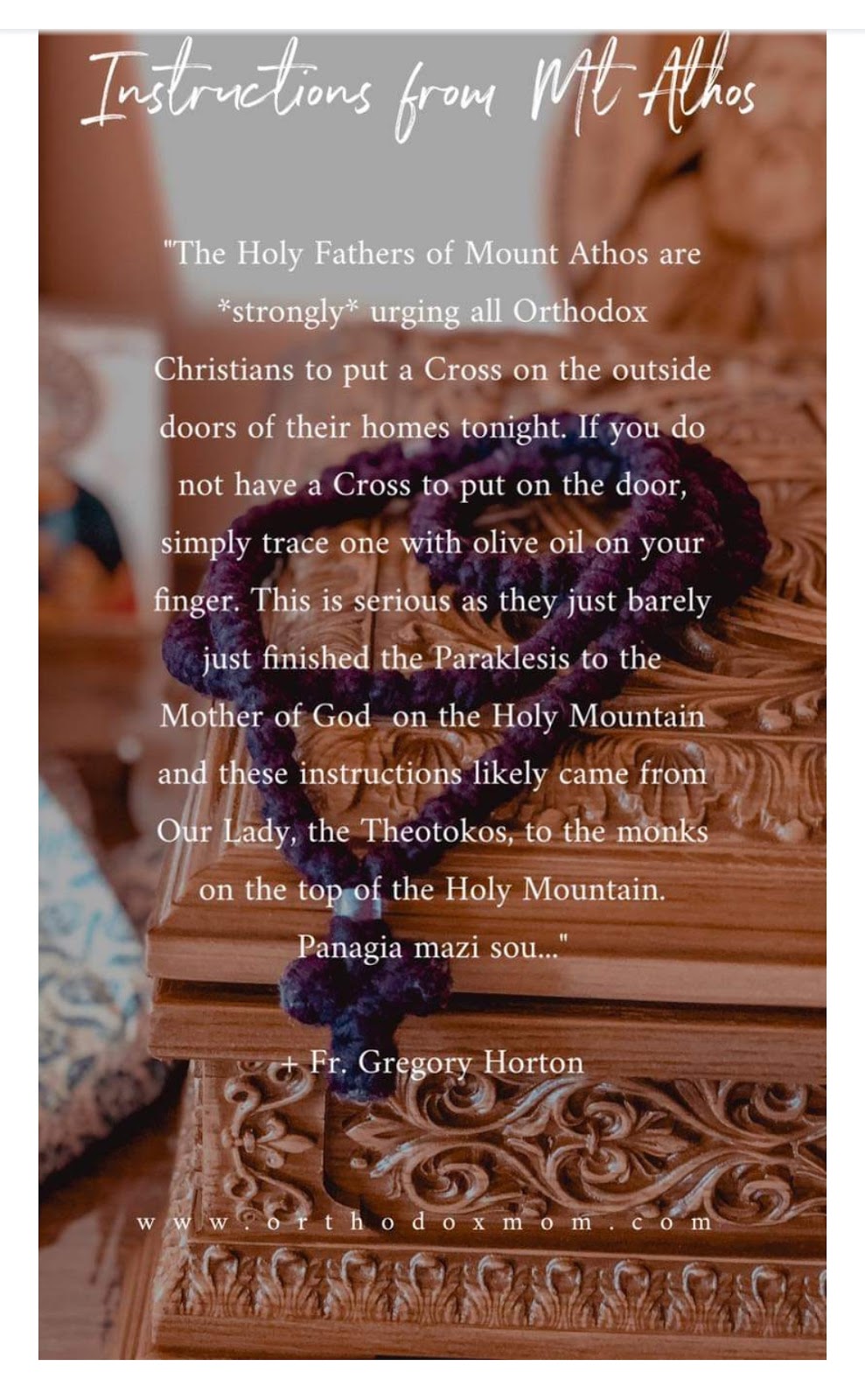 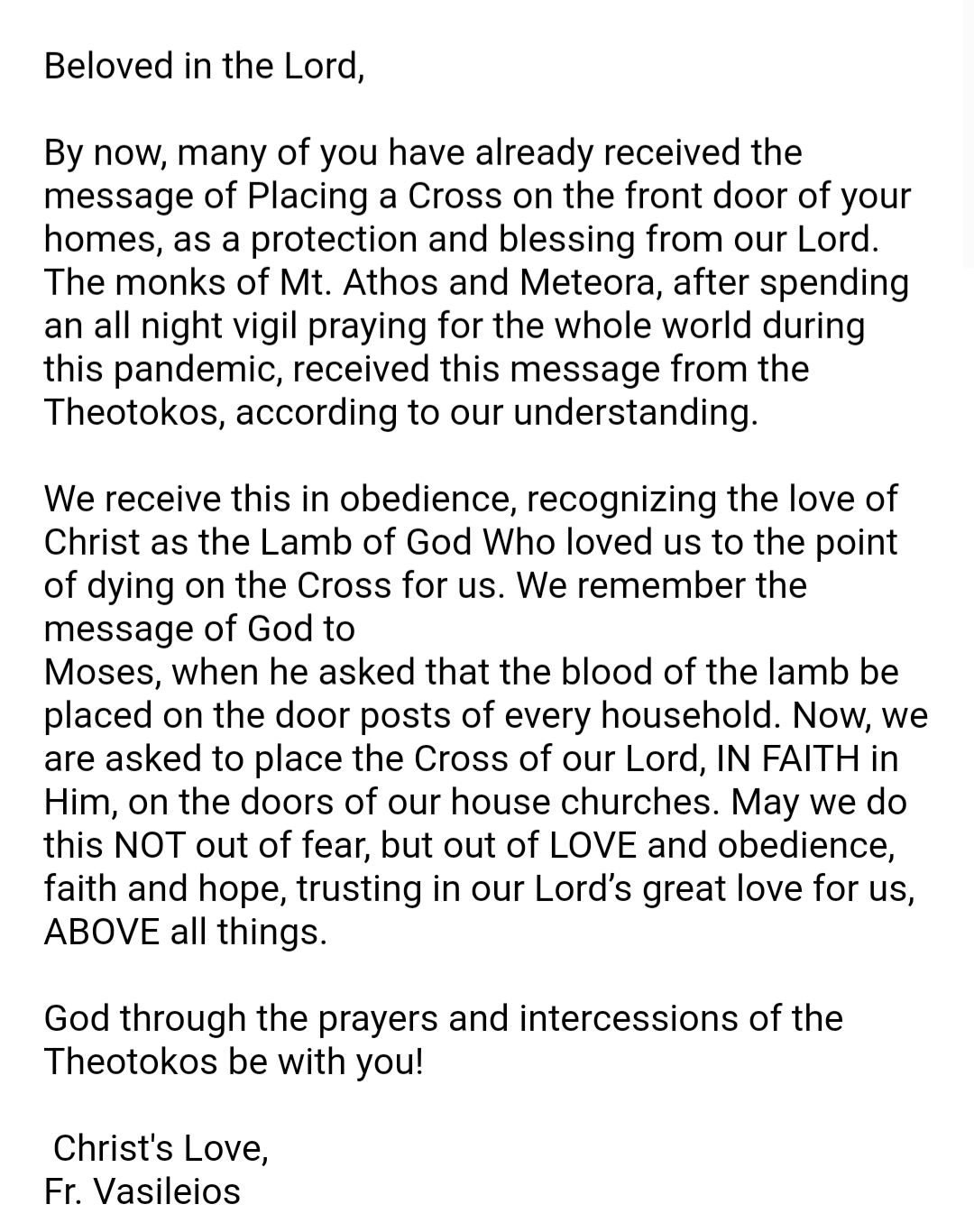 One more thing is that if you get scared and you pray, here are some psalms from the Message translation of the Bible that work for me when I'm scared or when the vibes are bad. (I also promised my bff that I would post the method I use to ground and protect my energy that I learned from the hippies in Berkeley for her and I will get to it soon!) The Message is a translation of the Bible from the original Greek and Hebrew into modern English vernacular, all done by this one pastor named Eugene Peterson (who died not too long ago but seems like he was the real deal to me). The Man was all about teaching in the daily language of the people and just being yourself and not trying to be formal or fancy when you pray, so Eugene wanted people to be able to read the Bible in the regular everyday language of the people today, while keeping the original meaning and context.

You can buy the book itself or read it for free here (look for The Message in the translation drop-down menu) or here.

Psalm 94
(I read somewhere that it's an Appalachian folk belief that reading this psalm three times in a row sends back bad vibes/curses/whatnot right back to the sender, and I've found it works.)

Oldie But A Goodie

Telling-people-off-for-being-snobby-hypocrites Jesus (preferably while flying a bald eagle and carrying an American flag and wearing a bowling shirt, just kidding although I think we can ALL agree that that would be an awesome idea for a tattoo) is my favorite Jesus, and it's extra satisfying in the Message because it's modern English so I'm always like, "Mmh! I know THAT'S right! You tell 'em!" whenever I sit down and read it.

I'm pretty sure he doesn't need me "co-signing the Word" like we're about to get in a fight on a street corner somewhere, but at the same time I think I would have made a "spirited addition" (to quote one of my former bosses describing me to the rest of the staff meeting) to his crew as a hype-woman precisely because of my vocal back-ups. Like, "He SAID pack up your janky-ass money changing stall and GET OUTTA HERE! I'M TIRED OF YOUR BULLSHIT! What? Too much? Again? Okay sorry, I'm just trying to help."

Anyway... Counting down until air travel is a thing again because these ticket prices are insanely cheap and it's straight bullshit. Also if anyone has any ice cream they could send my way, that would be tremendous as I have none. Thanks a bundle.