You Know You've Got It If It Makes You Feel Good

The other day, a friend from high school I haven't talked to in a long time except in passing on social media messaged me to tell me about the Perseids passing through, and then she told me it was good to see me "regain your Inganess" (as she put it). I asked her if she could tell a difference in me and she said yes, even from a distance and with limited actual individual contact, she could.

It was really nice to hear.

And it's really nice when you plan a visit with friends and they like, have a list of fun things they want to do while you're in town. They're excited to see you, and you them. Was I that far gone that long that something so simple now means so much?

Yeah, I think I was.

So I'm glad to have regained my "Inganess" too.

Have you ever read Tina Fey's book, Bossypants? It's hilarious. I laughed so hard at some parts that I had to put the book down and get myself together before I could go on. 10/10 recommend.

One of the stories she tells is how one of the SNL guys called her a "c**t and her reaction was kind of funny but so right on. She yelled at him, "No! You don't get to talk to me like that! My parents love me and I am not the child of alcoholics who takes that shit!"

That's not exactly fair to children of alcoholics, but I totally understand the basic message behind why she said it. One of my fears about dating and falling in love is, obviously, worrying about getting hurt. But not the kind of hurt that happens when you both try and it just winds up not working out. That kind is not fun, but it's not that bad. It's just a c'est la vie thing.

Back in my single days, I dated someone and we hit it off right away. We had electric chemistry and quickly went from going out once a week to hanging out almost every day. It was hot and heavy, and the feelings were flowing on both sides, too. Then one day, he got squirrelly and told me he had been in a long-term relationship for practically his entire dating life, had been newly single when we met, and he hadn't intended to get wrapped up in another person so soon. He was freaked out that we were spending so much time together (even though he was the one who had been calling me asking to come over, but that's fine) and basically wanted to just keep "seeing each other" without being in a relationship.

I'm not going to lie, the first time I ever found a therapist was over that guy. I think it mainly ended up triggering stuff from a past relationship that had been super toxic. But my therapist was rad, she focused on short-term, pragmatic, get you back on your feet and out my door type of therapy, and she did just that. I emerged stronger from the experience.

I'm simply not a person who can play second fiddle in love. I don't have one-night stands, not because I don't want to have a good time (Margaret Thatcher isn't/wasn't the only bengal tiger in the world) (if you only click one link in this post, click the bengal tiger one), but because, like, I literally could not fully enjoy myself based on physicality alone. (What if the guy turns out to be a murderer? Or a moron? Or a republican? That's why Goddess gave the world the Hitachi Magic Wand. So none of us have to sleep with a republican out of desperation ever again. And the world is grateful.)

Even beyond anonymous hook-ups, like, once a good friend in an open marriage literally offered to rent me an apartment and help pay for me to go back to school if I would be his mistress/girlfriend. The city was expensive and we were all friends, in fact we still are. I wasn't exactly offended by the offer, because I understood that he wasn't trying to insult me, we all had genuine warm feelings for one another, and he tried to sweeten the pot with some financial help. But I declined, for the same reason that I didn't want to be in an open marriage myself, even though so many people swore to me up and down that it was the only way to be married in this day and age.

It's not about feeling threatened by other women. I don't feel threatened. It's not about public appearances. There are many people who don't care what their partner does as long as they come home to them at the end of the day, and they go with them to see their parents on holidays, and they attend events together in public. To them, that's what matters. But I'm not that way. Of course I don't want to be humiliated in public, nobody does.

But in private, in the dark of night when your head is on your pillow, or in a shadowy corner where no one can see what you do but yourself and God, or even when we're out together seeing and being seen... If I'm not the one who's on your mind? Then what are we even doing?

Is it conceited to say? No, I don't think it is. Because I give everything in love, too. I'm a one-man kind of woman. I pour my love and affection over the one I adore, and nobody else. If you're getting it from me, you're the only one who's getting it. And I don't lie. That's why I had to do the hardest thing and walk away from my old life. Because I can't abide a lie.
That's also why I never particularly minded when other women would flirt with my ex-husband. Like, I would never disrespect those girls or talk shit or name names to my friends. Why would I? They were expressing their truth, and he wasn't going to do anything. If he had felt something back, I would want to know about it so we could discuss it and figure out what that meant for us. I certainly wouldn't have allowed him to disrespect them or be rude or cowardly in dealing with it. To be with a coward would be somehow worse than him catching feelings for someone else. And I think one of the worst aspects of being cheated on or lied to is the feeling that the other people are laughing at you behind your back. If they lead you to believe they're into you, then they take the coward's way out like, "What did you think was going to happen?" That kind of thing. It's so unnecessary and weak. It says a lot more about the perpetrator than anyone else.

And obviously, having a daughter who seems to look up to me as her personal hero (no pressure) is a big deal, too. But setting a good example is only part of it. Like, I get afraid that I'll fall for someone and get into a relationship, and then he'll yell at me or call me names (or worse) in front of my daughter. That would scare her and hurt her, but even if she's not there to witness it... It's hard to explain, but I think my fellow moms will get what I'm about to say. Somehow, the fact that she's my child means we're so connected that if you disrespect me, you really are disrespecting her, too. If you want to keep me around as a side piece, you're degrading her standing in the world, too. And one day, when she's older and she's getting messed around by someone she cares about for the first time, I need to be able to look her in the eye, and in the same way I pour love, pour strength into her, and say, "You are my daughter. You are worth more than this. You're worth everything. A strong man [or woman or non-binary person] will be the one who gives you everything. Now get back out there and act like you know it."

It also means I'm probably going to be single for a while, now. I would like to have one more child some day, and I don't exactly relish the idea of being alone, but I've done it before, I'm strong enough to do it again.

The real deal is always worth it. So, I don't see it as a bad thing. It's just what I do. I'll take a page from Brynhildur's book (just like "Sleeping Beauty" did, so don't hate on Disney for that one). I'm just going into my fire temple to sleep for a while. Only instead of sleeping, I'll be like, working and cooking and making the bed and walking the dog and raising my child and traveling and running my mouth and going dancing and swimming and shizz. Can I get a swan cloak out of the deal? That's what I want to know.

The one will know where to find me, wherever they may be. 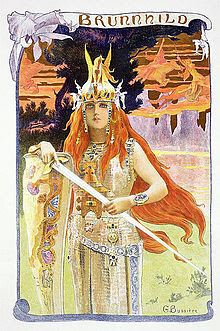 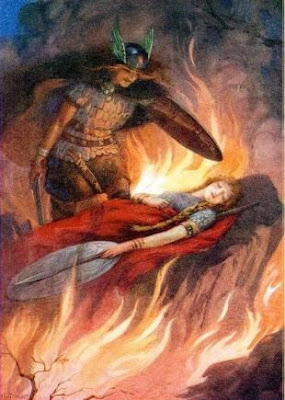