"May I Look At Your Tongue?" I Visit An Ayurvedic Healer

The time had come to find a proper hippy healer in this town. Whether that means that the person is a hippy who heals people or a person who heals hippies, I didn't really care. What mattered was that I had experienced a lot of pain in my "mysterious lady parts" during that "mysterious lady time of the month" and it was not normal. You've got to pay attention to signs, and to me this was a sign that I had let myself get way too far out of balance over the last month. So I called a local Ayurveda healer (Ayurveda is a form of medicine originally from India that encompasses mind-body-spirit wellness by keeping you in balance) that I had been planning on seeing for the last couple of months, but had to keep re-scheduling for financial reasons. I explained to her what had happened (I had such horrible cramps I couldn't get up off the floor). She said, "The time is now," and that we'd worry about how I would pay later.

I trust natural healers for most things more than I trust the white-coat regular doctors. Mostly because I've sat in rooms with people who were at one time very ill and were sent home to die by regular doctors, only to be healed by methods that those same doctors told them would never work. Also... I used to live in Oklahoma, and at one point while I was living there my skin was acting up, so I went to a dermatologist who gave me antibiotics to try to clear it up. One day I was running late for a hair appointment, and I didn't have time to eat enough food with the pill, so I just swallowed it with a little water while I was driving. Mistake. As I drove down the highway I suddenly had the overwhelming urge to throw up. Luckily, I was driving past a lake and barely had time to pull off the road and park the car next to it before I lost it. I grabbed the first thing I could find on the seat next to me, a newspaper, and vomited the pill onto the newspaper. I looked down at the little white pill, nestled in a pool of vomit, then looked up and out the window of my car. There, in a sage-colored pick-up truck next to me, sat an older Native American man, who had seen me throw up. He looked me in the eye, and I found myself whispering, "The white man's medicine is gettin' me down." I stopped taking the pills, and have sought natural remedies for most ailments since then.

I drove up to the house where the healer works, she also teaches yoga there, it looks like a normal two-story house in a cute little neighborhood, with lots of tall trees around. I got out of the car and saw a whole group of turkeys standing around in the driveway. (I later found out that turkeys are "good medicine" and symbolize peace and well-being.) 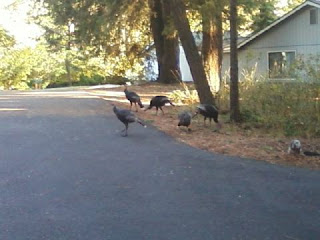 She was finishing teaching a yoga class when I arrived and had left some forms for me to fill out on a little purple bench, with a note saying if I wanted to I could fill them out in her office. But all the doors were closed except for the door to the bathroom and the door to the yoga room. So I slipped off my shoes to enter the yoga room, and saw that just outside the door was this picture: 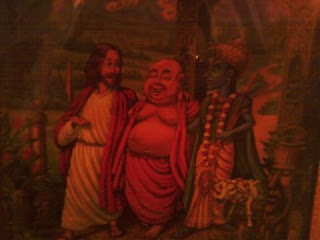 You've got to pay attention to the signs. I was in the right place. So I sat on the floor of the purple-walled room, filled out the forms, impatiently writing sms messages to friends and on facebook because I'm currently unbalanced and hyper. I was looking at the pictures of Ganesha and Kali hanging on the wall in front of me, recalling what I had learned about their images in an Indian Art class I took back in college, when the healer, Patricia, walked in.

You know how sometimes you meet people and you kind of recognize them as a member of your "soul tribe" right away? You see them and you have this, "Oh, hey. Where the heck have you been?" feeling instead of a "Nice to meet you," feeling? This was one of those moments. I stood up to shake her hand, but she opened her arms for a hug and greeted me like she hadn't seen me for years.

It's funny, she starts sizing you up right away and analyzing you based on different features, figuring out which combination of the three "doshas" you fit into, and how much of each. They figure out your individual map of health. She looks at your hair ("You have Pitta hair") and your eyes ("Well you know you have Kapha eyes, don't you?"), your skin ("You're pale like a Vata"). And then she takes your pulse in your wrist for a long time. She closes her eyes and feels the light pulse, then the deep pulse, then she feels what features your pulse has. Quite a while is spent on your pulse, and she tells you what she feels there, like "You have a lot of life force in you." Then she says, "May I look at your tongue?" And you stick your tongue waaaay out and she draws a picture of it and talks about what she sees. Then she asks you about your sleep, your eating habits, your poo, your pee, your mental health, what's been going on in your life for the last few years, where you're headed now, all kinds of things.

We chatted for a long time, we laughed. It turns out I'm tri-doshic, which means I'm almost equal parts of all three categories, and so I have to work really hard to stay balanced (I was not shocked). But the thing that's got me all out of balance is the Vata dosha in me. "Vata is like a wind that blows and tries to dry you out. It blows a lot more when you're moving or traveling a lot. This fans the flames of fiery Pitta, which is why you feel hot and get hungry so quickly and keep waking up in the middle of the night. Then Kapha tries to help, but it makes you tired and creates mucus in the back of your throat. And the wind of Vata is what's creating the pain, and anxiety, which then gets Pitta depressed..." etc. etc. So she figured out that if I get the Vata under control it will bring the rest of me in balance. She's going to study the information I gave her and then send me suggestions for things I can do, and then make me a special herbal tea to drink too.

We also got around to talking about astrology, and so she made me a Vedic astrology chart, which is the ancient Indian form of astrology. It proved her theory that I'm tri-doshic. It also showed that in Vedic astrology I'm a Leo instead of a Virgo, and my rising sign is Libra instead of Cancer, but my moon sign is still as fishy as ever, Pisces. Anyway, it was interesting. Apparently in this lifetime I'm heading away from "individual effort" (thank god) and heading toward "fame and fortune, and faith, spirituality, evolution." Not too shabby!

So anyway, that was my first experience with this particular hippy healer. She was so nice, we like each other, I was able to make her laugh, she's happy to be helping me and I'm happy to be helped! Until I get her list of recommendations, I'm supposed to rest and eat "warm, moist foods." Those are doctor's orders I am happy to follow! I'm always hungry. My inner furnace burns my food up fast. In fact, I'm hungry now. Time to eat!

I recommend a good Ayurveda practitioner to anyone who's feeling out of balance! Don't be shy, stick out your tongue, then tell them all about your poo. It's fun! I'll keep updating how it goes with the remedies.

[Originally published on  October 7, 2010 at http://ingachicago.blogspot.com/2010/10/may-i-look-at-your-tongue-hippy-healer.html]